September 18, 2015
Crater Lake National Park was one of our key destinations for this trip.  This week, we have travelled through Oregon, California, Nevada and tonight landed in Utah.

Our first attempt at Crater Lake was from the North Entrance, along the East Rim.  It was very cold - 4*C at the lake!  On the way in, there were wildfires smoking away.  Fire crews in the area but apparently they are contained.  Lots of evidence of the fires with burns right to the roadway.

Got a few photos of Crater Lake and enjoyed the Visitor Centre including their film.

Stayed in Klamath Falls, and it was still cold and rainy all the next day so we had a rest day!

The next day we attempted Crater Lake again, started out cool but dry - along the way there are bright patches of blue sky breaking out, and very fat rainbows!  Still seeing a lot of wildfires smoking.  Spotted bald eagles on the telephone poles along the way, and handsful of red-tailed hawks.  Arrived at the South Entrance and at the Rim Village stopped for a hot drink ... and to wait out the rain, which became sleet, and fog for special interest.  And since it had snowed here the day before, they put down some traction gravel on the pavement!  Yuck yuck yuck.

We waited and waited, even paid for an hour of wifi to check on the weather. It's not going to get better so we head back to Klamath Falls again. 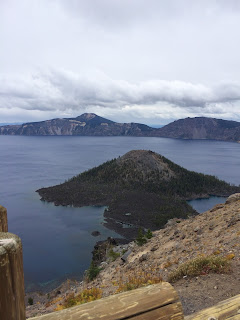 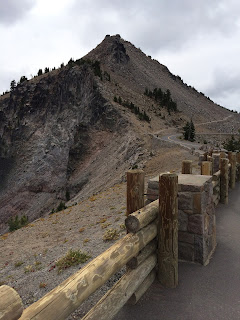 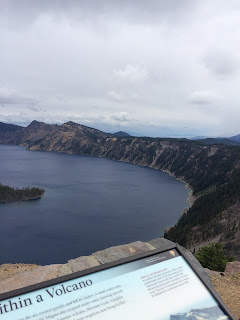 It's staying cool so we'll have to leave a complete trip around the Rim Road for another trip.  Time to head east - but we need to go south a bit to catch some warmer weather.  And to dip the wheels into California!  Passed by Lava National Monument along the way.  The lava rocks were everywhere!
And now to start back east!  Coming into Nevada, we need to gas up and of course the gas station is also a casino!

We opt for blasting through Nevada on I80 instead of the 'Loneliest highway in the US - Hwy 50'.


And here at the Pequop Summit, on the West side of I80, is a bicyclist!  I feel pretty sheepish whining about sore hands from driving ... 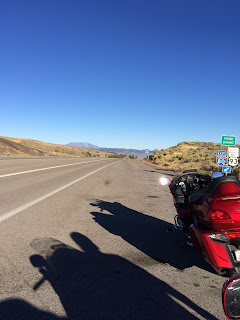 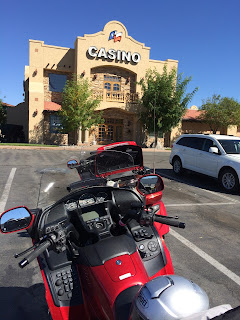