April 17, 2014
Really, you'd think that not working would mean I'd get back to posting! Apparently not so much.  An assortment of 'excuses' ...

This week I am starting to feel like a real person again.  Getting up, staying awake, doing things.  Feels so much better.

Today I was sitting in the sunshine for lunch, enjoying some awesome youtube clips of Josh Groban performances where he invites audience members to sing with him - heavenly!  A fun one ... https://www.youtube.com/watch?v=aN5-IbjoGLs

Such a performer - have been lucky enough to attend a concert in London a while ago.  I also very much appreciate how real he seems, connected to his fans, connected to the world.

I did a lot of work this week on unpacking my quilting stuff.  I've been mostly cutting up jeans (that I collected for years and years - as the kids grew, as they wore out).  A few quilty things were unpacked, and I did finish the top that I had been working on before we moved (YAY!).  But I couldn't justify to myself starting to cut out something new with so much stuff still packed.

I *really* want my long-arm set up again, so I have to move the boxes out of where it is going to go.  A couple of weeks ago we popped into the nearby quilt store (Sew Creative Quilting - http://www.sewcreativequilting.ca/) to measure up how much clearance I really need.  We'd been still waffling between setting it up in an upstairs room (with *lots* of light) or downstairs - there is also lots of light but the stairs down have a turn so I'm not sure that I'll be able to get the table out again once it's set up.

I'm glad we went to do the measuring, as we did figure out how very tight it would be if we did set it up in the upper room.  And a huge bonus - while we were there I asked if anyone is making a 'dead rail' for these frames - and YES - actually, Pfaff does!  An add-on with attachments that just snap over the existing rail caps.  ORDERED!  Should arrive soon :)  Sorry, can't find any photos of it.

And I found a bunch more of the tops that are just patiently awaiting their turn on the frame :)

And I found the red striped denim that I scooped up somewhere years ago, to go into the denim quilt.
So I have piles of broken down boxes than need to be carried upstairs and out, awaiting pick-up if the moving company will still come get them.  Very deep piles of packing paper unfolded, flattened and folded and repacked into a wardrobe box, ready for the next time someone moves.

I got to admire my fabric hoarding collection, put all the kits together in one spot, find the tools, admire the books.  All fired up with so many ideas again! 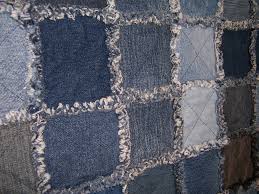 Raspberry & Chocolate Sampler
I was part of an online swap for pink/brown 12" blocks and I should get those together!  Here is a sample of one that another of the swappers (Charismah) finished ... So it's a mix of UFO's and new projects; piecing and quilting that I'm sooooo ready to get back at :)

As soon as we get an electrician in to install some outlets and lights.  And build the frame.  Buy some anti-fatigue mats.  Build more shelving, stow more tubs.  Reorganize.  I'm so glad I'm feeling better :)