November 17, 2012
A wonderful day today!  Even though our crops are not off, and the weather was clear, we did *not* spend the day harvesting.  Nope - today we spent the afternoon with our Massey family.

My husband started his career with Massey Ferguson in Toronto, in the Engineering group, with the Test Track and later with their Central Electronics Group and for a wee bit as things were winding down, at their combine facility in Brantford.  He was elbow-deep in their combine harvester design, development and testing.  Field trips were six weeks (one call home per week was paid for) so the crews really were like family.

Massey closed its doors in North American production in 1988.  But this group of co-workers, colleagues and friends has continued to gather together three times a year, ever since.  We have been able to attend many of these events - Christmas parties and summer BBQ's most often.  It's pretty amazing - people committed to each other 25 years after their company closes its doors (with much controversy).  This gathering, there were 43 attendees.  And again, as has often happened, there are people at these gatherings that we've never met before!  The gatherings have been open to anyone connected with Massey - often we meet people who had already retired from Massey before my hubby started.

Today was very cool - a fellow from the marketing/cost accounting side, who had worked in Des Moines, was at our table.  As well as a fella who is now involved in the photography for a new magazine "Massey Harris Ferguson Legacy Quarterly".  Very interesting conversation about some of the experiences while at Massey.

Just for fun, this is the model of combine that my hubby was involved in development/testing ... 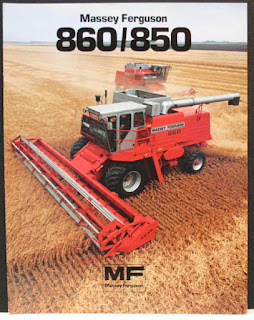