Yesterday, we saw two car washes - one that we ducked into to watch a storm crash by, and the other to wash the dust off the bikes at the end of the day.  And immediately after we did that and parked the bikes for the night, another storm rolled thru.  I was just headed out to fetch ice, and the hotel desk staff suggested we move the bikes up under the canopy.  Well, I didn't even have time to get mine started and down came the rain.  A lightening strike nearby took out power and gave a lovely spark show at the power pole at the end of the property!  Wind and rain just gushed out of the sky - I was drenched instantly.  Don thought the bikes would be just fine where they were - they were solidly parked, locked wheels, heads up, in gear ... so I abandoned them to the elements ... and of course they were just fine!

We had watched the clouds all day and at one point turned back rather than heading over a mountain pass where it looked very ominous.

Today, it was glorious!  Breakfast at the hotel was even fun - our breakfast-mates were a family from Florida and another family (not sure where they were from) ... the Florida family was on their way back from visiting the CN Tower and Niagara Falls.  The other family immediately translated that to "CNN Tower" ... I didn't have the heart to correct them :)

After a quick bite at Yokum's near Seneca Rocks, we headed off on #250.  Oh my, what a spectacular ride!

We had to turn around and do it again on one piece :)  Road is in exceptional shape - nice cambers on curves, good markings, well signed.  One upside down truck grade sign, oh well!  We also tried out our video camera on the bike - no idea whether it was even aimed well!

Here's our result - we're headed up - wasn't it a beautiful day!!!  I do need to be able to stay closer to the bike I'm chasing :)

After our wonderful ride on #250 for miles and miles and miles, our GPS had us take a smaller road - we debated for a bit but decided to go for it.  No centre markings, about a lane & 1/2, no shoulders.  But paved!  We sure surprised some of the local folks :)  We thought maybe a few miles of this but it turned into more than an hour.  And of course, my fuel gauge started showing "E" shortly after we started out through the back country.
It was a nice crop tour - lots of livestock, including some *humungous* long-horn steers (even longer than the long-horns that Wayne had, I'm sure!).  An angry dog barking madly at us (glad he was behind a fence) and another beautiful German Shepherd that just trotted beside us for a bit.  One huuuuge hawk or falcon that tried to take off right in Don's path - narrowly missed each other, thankfully!  And then, just after the 'Prepared to Stop' sign, this lovely little spot ...
A couple of taps for this natural spring, diverting water into a trough so it would go under the road rather than over it.  Pretty little sight!

Bonus - our hotel was right off of our shortcut, right beside both a gas station and Applebee's.  Hurrah! Tucked in for the night, fed and happy :) 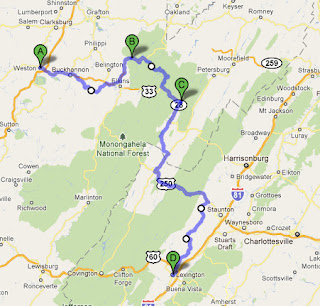