Here is the route we travelled today - Colorado's Independence Pass, Freemont Pass, Tennessee Pass.
Temps started out about 12 C, did warm up at lower elevations.  Gorgeous sunshine all day.  Excellent roads! When we did Indie pass last year, we were at the summit at sundown, made the best part of the descent in the dark - gotta say it is so much prettier in daylight!
Some photos of the day ... 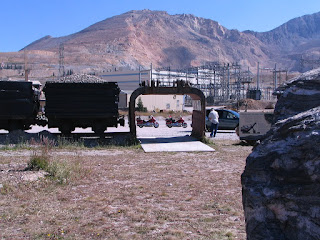 In this photo, we are checking out a display of mining information and equipment at Climax, Co - they've mined many different minerals, including Molybdenum.  Looking back through the bucket they've turned into a gateway to the display, the bikes were perfectly framed!
Below, we're at the lookout at Independence Pass.  Bottom photo is the coolest hairpin on Indie Pass, stitched together 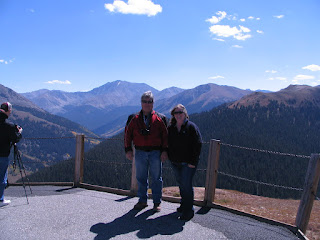 Music for today?  Well, that's a long story.  I managed to leave my ipod in the bike last night so it didn't get charged ... so for a while was trying to get radio stations (this doesn't work well in the mountains).  Then my wiring got adjusted so I could listen to the songs loaded on my GPS.  Which was fine, except it was set to play Bob Seger's Silver Bullet album, over and over and over.  Finally got it switched so it would play all the songs.  Don't get me wrong, I love Seger ... just not as the only selection :)
Reactions: